To Oak or Not to Oak? Do Oak Barrels Influence Wine?

Any visit to Niagara’s wine country isn’t complete without a tour of a working barrel cellar. The barrel cellar is one of the most famed aspects of winemaking. Perhaps more than any other part of the winemaking process, it is the time that wine spends in barrels that creates the most interest and intrigue. Thirsty wine enthusiasts love to explore these cool and dimly lit rooms, which are often underground to take advantage of natural temperature control. Row after row of beautiful, handcrafted barrels can be the perfect place to pose for photos or even to pop the question!

But what is the real difference made by maturing wine in oak barrels? This article will serve to offer a basic understanding of the reason why oak barrels have been a winemaking staple for hundreds of years.

Unlike steel tanks, oak barrels are not airtight. The boards that make up the barrels are bound tightly enough that they prevent wine from seeping out, but they are porous and allow oxygen to get inside and interact with the wine. Interaction with oxygen will serve to add new depths of flavour to wine. The wine will develop beyond the initial fruitiness that all wines show when they are young. Instead, flavours that are earthy and savoury will show.

The barrel will permit more or less oxygen inside depending on what variety of oak was used in its composition. While many varieties of oak may be used, the two most common ones are French oak and American oak. French oak grows in a cooler climate and therefore grows more slowly. The grains in the wood are tighter and permit a slower transfer of oxygen into the barrel. This creates a wine with greater complexity (many interesting layers of flavours). By contrast, American oak grows in a warmer climate. It grows more quickly and its grains are wider. This permits a faster ingress of oxygen into the barrel and creates a wine with a rounder mouthfeel. There will also be a great deal of flavour imparted directly from the wood.

Barrels will also release some tannins into the wine, and the oxygen that enters the wine will soften these tannins. Generally the longer a red wine is stored in an oak barrel, the softer the tannins will become and the more integrated they will be with the wine as a whole. Most wine consumers consider this to be a marker of a higher quality wine.

In addition to the textural changes that come about from interaction with oxygen, new flavours will be imparted into the wine directly from the wood itself. French barrels are known to impart a vanilla flavour into the wine. This is caused by a substance in the wood called “vanillin,” which is the same substance that gives vanilla beans their unique flavour. American oak barrels are known to impart flavours of coconut into wines. Other flavours that may be imparted from the wood include smoke and toast. The degree to which these flavours will be imparted depends on the level of “toasting” the barrels undergo. Toasting takes place when barrels are splayed open over a flame. The heat is necessary to soften the wood so that it may be bent and held together by metal rungs. A side effect of toasting is that the inside of the barrel is charred by the flame. Barrels may be toasted to various degrees. A high degree of toasting can impart flavours of campfire smoke into a wine whereas a light level of toasting imparts a flavour more like toasted bread.

Not all oak barrels are equal. The number of times a barrel has been used to mature wine will have an effect on how much oxygen gets through the barrel and how much wood flavour is imparted into the wine. As barrels are used, their pores become clogged with tartrate crystals from tartaric acid which is a natural substance found in newly vinified wines. After five to six years of consecutive use a barrel will be considered inert (no longer allowing a transfer of oxygen inside). Inert barrels will usually be sold for other purposes which could include anything from making furniture or flower pots, to being used by craft breweries to mature ale. Another factor that can influence the transfer of oxygen into the wine is the size of the barrel. Large scale barrels will impart less oxygen because their surface-area-to-wine ratio is lower. Furthermore, a wine that has been fermented inside a barrel will receive a greater level of oxidization and wood flavours than a wine that was fermented in a steel container and then later transferred to an oak barrel for maturation.

In modern times new techniques have been created to impart wood flavours into wine that are more cost effective than purchasing expensive oak barrels. (A standard barrel will hold 300 bottles of wine and easily cost $1200 or more.) These techniques include adding oak chips or oak staves to a wine that is maturing in a steel container. This will impart wood flavours like vanilla into the wine without the added textural benefits of oxidization.

Wine tasting in Niagara is a barrel of fun! Join a tour with Niagara Vintage Wine Tours to learn more about winemaking and to taste an array award-winning wines. Every tour includes the showcasing of a working barrel cellar. Call our guest services agents at 1-866-628-5428 and get the barrel rolling today! 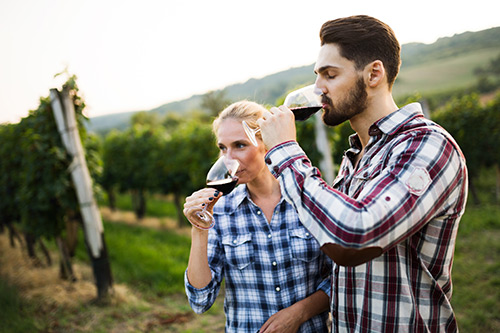 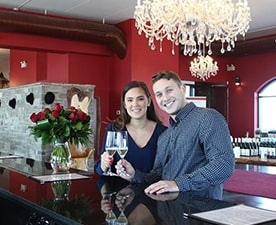